A Tangled Tale is a collection of 10 brief humorous stories by Lewis Carroll (Charles Lutwidge Dodgson), published serially between April 1880 and March 1885 in The Monthly Packet magazine. Arthur B. Frost added illustrations when the series was printed in book form. The stories, or Knots as Carroll calls them, present mathematical problems. In a later issue, Carroll gives the solution to a Knot and discusses readers' answers. The mathematical interpretations of the Knots are not always straightforward. The ribbing of readers answering wrongly - giving their names - was not always well received (see Knot VI below). In the December 1885 book preface Carroll writes: The writer's intention was to embody in each Knot (like medicine so dexterously, but ineffectually, concealed in the jam of our early childhood) one or more mathematical questions - in Arithmetic, Algebra, or Geometry, as the case might be - for the amusement, and possible edification, of the fair readers of that magazine. Describing why he was ending the series, Carroll writes to his readers that the Knots were "but a lame attempt." Others were more receptive: In 1888 Stuart Dodgson Collingwood wrote, "With some people, this is the most popular of all his books; it is certainly the most successful attempt he ever made to combine mathematics and humour."They have more recently been described as having "all the charm and wit of his better-known works..".......... Arthur Burdett Frost (January 17, 1851 - June 22, 1928), usually cited as A. B. Frost, was an American illustrator, graphic artist and comics writer. He was also well known as a painter. Frost's work is well known for its dynamic representation of motion and sequence. Frost is considered one of the great illustrators in the "Golden Age of American Illustration." Frost illustrated over 90 books and produced hundreds of paintings; in addition to his work in illustrations, he is renowned for realistic hunting and shooting prints..... Charles Lutwidge Dodgson ( 27 January 1832 - 14 January 1898), better known by his pen name Lewis Carroll, was an English writer, mathematician, logician, Anglican deacon, and photographer. His most famous writings are Alice's Adventures in Wonderland, its sequel Through the Looking-Glass, which includes the poem "Jabberwocky," and the poem The Hunting of the Snark - all examples of the genre of literary nonsense. He is noted for his facility at word play, logic and fantasy. There are societies in many parts of the world dedicated to the enjoyment and promotion of his works and the investigation of his life. From a young age, Dodgson wrote poetry and short stories, contributing heavily to the family magazine Mischmasch and later sending them to various magazines, enjoying moderate success. Between 1854 and 1856, his work appeared in the national publications The Comic Times and The Train, as well as smaller magazines such as the Whitby Gazette and the Oxford Critic. Most of this output was humorous, sometimes satirical, but his standards and ambitions were exacting. "I do not think I have yet written anything worthy of real publication (in which I do not include the Whitby Gazette or the Oxonian Advertiser), but I do not despair of doing so some day," he wrote in July 1855. Sometime after 1850, he did write puppet plays for his siblings' entertainment, of which one has survived: La Guida di Bragia. In 1856, he published his first piece of work under the name that would make him famous. A romantic poem called "Solitude" appeared in The Train under the authorship of "Lewis Carroll." ....

Authors: Lewis Carroll, Arthur B. Frost
Categories:
A Tangled Tale is a collection of 10 brief humorous stories by Lewis Carroll (Charles Lutwidge Dodgson), published serially between April 1880 and March 1885 in The Monthly Packet magazine. Arthur B. Frost added illustrations when the series was printed in book form. The stories, or Knots as Carroll calls 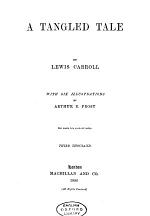 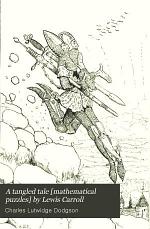 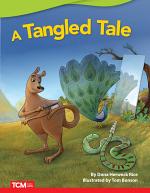 Authors: Dona Herweck Rice
Categories: Juvenile Fiction
The peacock, the monkey, the horse, and the kangaroo each think they have the best tail. When their tails get tangled together, it becomes obvious which one is best! Early readers will love the entertaining story and whimsical illustrations in this picture book. With pre-reading questions, this fiction book is 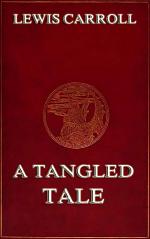 Authors: Lewis Carroll
Categories: Mathematics
This is the extended and annotated edition including * an extensive biographical annotation about the author and his life * all the original illustrations A Tangled Tale is a collection of ten brief humorous stories by Lewis Carroll (Charles Lutwidge Dodgson), published serially between April 1880 and March 1885 in