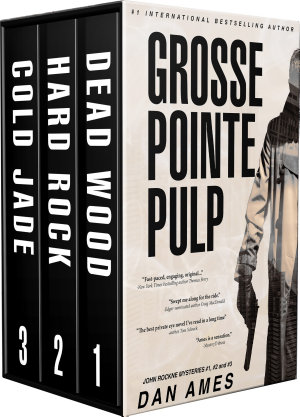 A USA Today BESTSELLING AUTHOR The First Three Full-Length Books in a Bestselling, Award-Winning Mystery Series DEAD WOOD (John Rockne Mystery #1) In the exclusive enclave of Grosse Pointe, Michigan, a woman who builds custom guitars is murdered. A disgraced ex-cop turned private investigator is hired by the dead woman’s father and immediately becomes the target of a violent ex-convict. An enigmatic music star performs damage control on her links to the dead woman. And a professional killer who idolizes Keith Richards is brought into town by a mysterious employer. DEAD WOOD is what great mysteries are all about: love, hate, faith and vengeance, all wrapped up in an explosive story that simply refuses to let up. HARD ROCK (John Rockne Mystery #2) Private Investigator John Rockne is determined to find out who is responsible for the brutal murder of a young man in Grosse Pointe. A contract killer known only as The Spook wants to keep the truth buried forever. Rockne quickly uncovers a series of dark secrets with ties to his own tortured past. HARD ROCK is a thrilling conclusion to the bestselling crime novel DEAD WOOD. COLD JADE (John Rockne Mystery #3) Once a cop in the well-to-do Detroit suburb of Grosse Pointe, John Rockne was dismissed from the force after making a tragic mistake that resulted in the brutal murder of a young man. Now working as a private investigator, John is hired by a man whose daughter is missing and he soon discovers the young woman was living a secret life under the name Jade. John quickly realizes the world Jade had entered was a dangerous one filled with thieves, drugs, pimps and murderers. He has no idea if he can find her…and bring her out alive. “Dan Ames' writing reminds me of the great thriller writers -- lean, mean, no nonsense prose that gets straight to the point and keeps you turning those pages.” --Robert Gregory Browne, author of Down Among the Dead Men "As gritty as the Detroit streets where it's set, DEAD WOOD grabs you early on and doesn't let go. As fine a debut as you'll come across this year, maybe any year." --Tom Schreck, author of Out Cold, A Duffy Dombrowski Mystery “From its opening lines, Daniel S. Ames and his private eye novel DEAD WOOD recall early James Ellroy: a fresh attitude and voice and the heady rush of boundless yearning and ambition. Ames delivers a vivid evocation of time and place in a way that few debut authors achieve, nailing the essence of his chosen corner of high-tone Michigan. He also deftly dodges the pitfalls that make so much contemporary private detective fiction a mixed bag and nostalgia-freighted misfire. Ames’ detective has family; he’s steady. He’s not another burned-out, booze-hound hanging on teeth and toenails to the world and smugly wallowing in his own ennui. This is the first new private eye novel in a long time that just swept me along for the ride. Ames is definitely one to watch.” — Craig McDonald, Edgar-nominated author “Dead Wood is a fast-paced, unpredictable mystery with an engaging narrator and a rich cast of original supporting characters.” –Thomas Perry, New York Times bestselling author of The Butcher’s Boy. 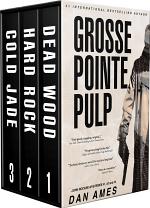