In the aftermath of the 2012 elections some progressive commentators have drawn the mistaken conclusion that the Democratic coalition no longer needs to win the support of any significant number of white working class Americans. The high turnout and pro-Democrats tilt of youth, minorities, single women and upscale professionals in 2012 has led some political strategists to imagine a new "Obama coalition" that does not need to include white working Americans. Andrew Levison's remarkable new book dramatically challenges this false notion and presents a compelling case that winning the support of a substantial group of white working class Americans remains absolutely critical for the creation of a stable Democratic majority. The book very dramatically shows: That white workers remain a critical swing group in American politics That white workers represent a far larger part of the workforce than is often thought. That white workers are not all "conservative" but include many progressives and moderates as well. The book presents extensive data drawn from demographic analysis, opinion polls, focus groups and field research to butress its dramatic conclusions Reviews: Andy Levison's The White Working Class Today is a tremendous contribution to our understanding of this vital group. Too many progressives dismiss the white working class as either irrelevant or hopelessly reactionary or both. Levison shows in this compelling, empirically grounded work just how wrong they are. I don't often describe a book as a "must read." This is one. Ruy Teixeira, Senior Fellow at the Center for American Progress, Guest Scholar at the Brookings Institution and Author of The Emerging Democratic Majority: The White Working Class Today is a studious, well-researched, and timely signal to progressives that we cannot ignore today's Reagan Democrats. Levison is a rare voice in progressive and Democratic circles today, and this book raises critical questions about how progressives should think about, define, and address the needs of the white working class. Stan Greenberg, leading Democratic pollster, political strategist and advisor to Bill Clinton, Al Gore, John Kerry, Tony Blair and other progressive leaders "In "White Working Class Today," Andrew Levison offers us a powerful analysis and solution to one of the most important dynamics in politics -- the alienation between white working class voters and liberals. Levision fills a large void in an important discussion, explaining exactly how the Democratic coalition can break the political stalemate, bring this important group into the fold and move a stable, progressive agenda forward. Karen Nussbaum, Executive director of Working America, the 3 million member community affiliate of the AFL-CIO. Andrew Levison's book assesses today's white working class from a fresh, empirically-grounded perspective, and provides unique insight for all those who want to understand this critically important segment of U.S. society and political life. Ed Kilgore, political commentator, author of the Washington Monthly's Political Animal.

Authors: Andrew Levison
Categories: Progressivism (United States politics)
In the aftermath of the 2012 elections some progressive commentators have drawn the mistaken conclusion that the Democratic coalition no longer needs to win the support of any significant number of white working class Americans. The high turnout and pro-Democrats tilt of youth, minorities, single women and upscale professionals in

Authors: Joan C. Williams
Categories: Business & Economics
Around the world, populist movements are gaining traction among the white working class. Meanwhile, members of the professional elite--journalists, managers, and establishment politicians--are on the outside looking in, left to argue over the reasons. In White Working Class, Joan C. Williams, described as having "something approaching rock star status" by 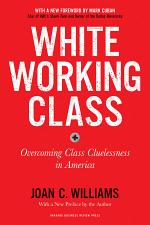 White Working Class, With a New Foreword by Mark Cuban and a New Preface by the Author

Authors: Joan C. Williams
Categories: Business & Economics
"It is really worth a read..." -- Former Vice President Joe Biden, interviewed on Pod Save America Now in paperback with a new Foreword by Mark Cuban and a new Preface by the author, White Working Class explains why so much of the elite's analysis of the white working class 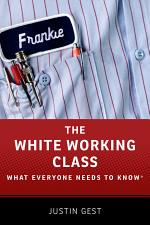 Authors: Justin Gest
Categories: Political Science
Powered by original field research and survey analysis in the United States and United Kingdom, The White Working Class: What Everyone Needs to Know® provides a comprehensive and accessible exploration of white working-class politics and the populism that is transforming the transatlantic social and political landscape. In recent years, the
Language: en
Pages:

Authors: Garth Stahl
Categories: Political Science
This thesis investigates how white working-class boys experience social and learner identities in three educational sites. It presents the findings of an in-depth sociological study of teenage boys from one locality in South London, focusing on the practices of 'meaning-making' and 'identity work,' the boys' experience and the various disjunctures